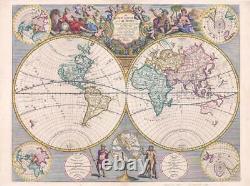 1721 Extremely Rare A NEW MAP OF THE WORLD Double Hemisphere John Senex (LM13). " A NEW MAP OF THE WORLD From the Latest Observations revised by I Senex Most Humbly inscribed to his Royal Highness George Prince of Wales ". Superb double hemisphere world map, with the title cartouche elaborately surrounded by allegorical figures representing the four continents. The figure of Europe is portrayed as a land of abundance, while Africa is depicted wearing the elephant headdress and holding the scorpion of the desert sands. Asia the seat of Religion, carries a smoking censer in one hand and a Balsam branch in the other while America is depicted as a robed female Amazonian with a headdress and bow.

On the right of the armillary sphere is the mythological figure of Hercules depicted wearing a lion skin and holding an olive wood club. On the left is the figure of Hermes the patron of boundaries and of travellers shown wearing his broad-brimmed hat. In the large sphere America's north west coast is uncharted and California is shown as an island, whereas in the smaller lower left sphere, California is shown correctly, as a peninsula. Overall size 59cm x 44cm (23.5in x 17.5in) with original & later hand colouring. Outstanding condition with central fold as issued. PRINTS MAPS HISTORICAL DOCUMENTS POSTAL HISTORY BOOKS POSTERS STAMPS POSTCARDS EPHEMERA And anything else that is considered Antique and made of Paper.

ALL OF OUR ITEMS ARE ORIGINAL ANTIQUES - NOT MODERN COPIES. The item "1721 Extremely Rare A NEW MAP OF THE WORLD Double Hemisphere John Senex (LM13)" is in sale since Saturday, October 30, 2021.

This item is in the category "Antiques\Maps, Atlases & Globes\World Maps". The seller is "antiquepapercompany" and is located in KENT. This item can be shipped worldwide.