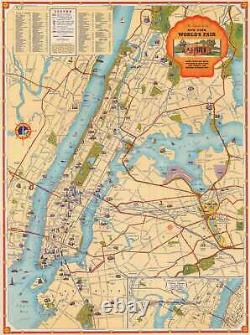 1939 Shell Pictorial City Map or Plan of New York City for the World's Fair. WE SELL ONLY ORIGINAL ANTIQUE MAPS - NOT REPRODUCTIONS. Title: The Locale of the New York World's Fair Description: This is a 1939 Shell Oil Company pictorial city map or plan of New York City. The map depicts the region from Jersey City to Flushing and from Riverdale, Woodlawn, and Pelham to Prospect Park and New York Bay. Created as a tourist map for people driving into the city to visit the 1939 New York World's Fair (located in today's Corona Park), routes to the fair are highlighted in red, making them stand out against the cream of the rest of the map. Zones of the fair are illustrated by vignettes, including the government zone, the food zone, the communications zone, the transportation zone, and the amusement zone. Attractions throughout the city are illustrated in profile, in much the same fashion as the zones at the World's Fair, including the Empire State Building, the Chrysler Building, Rockefeller Center, the Metropolitan Museum of Art, the Museum of Natural History, the Museum of the City of New York, the Brooklyn Museum, the Brooklyn Academy of Music, and Yankee Stadium.

Both the Bronx Zoo and the Prospect Park Zoo are marked by an elephant. Numerous parks are illustrated in green, including Central Park and Prospect Park.

Harlem and the'Jewish Ghetto' on the Lower East Side are illustrated by racist and stereotyped caricatures. The Ghetto', as it was known in the first few decades of the twentieth century, was simply the part of New York City where many Jewish immigrants from Eastern Europe created their community on the Lower East Side of Manhattan. At the time, these Jewish immigrants made this neighborhood the most crowded neighborhood in the world. An inset map in the lower right corner illustrates the Pulaski Skyway, a route from Philadelphia and the Newark Airport to New York City. A legend, situated in the upper right corner, explains the various notations used and is flanked by an index of points of interest, airports, golf and country clubs, and yacht and boat clubs.

Area of infill along fold line just below title cartouche. Shell Map of New York World's Fair on verso. If your address is a P. Duty varies by country and we cannot predict the amount you will be charged.

Some countries are duty free, others are not. Other Services Conservation Framing: Geographicus recommends basic conservation framing services for any antique paper. We do not offer this service. Antique Map Restoration: Geographicus can repair and restore your antique map. Services include deacidification cleaning flattening and backing. The item "1939 Shell Pictorial City Map or Plan of New York City for the World's Fair" is in sale since Thursday, August 22, 2019. This item is in the category "Antiques\Maps, Atlases & Globes\North America Maps". The seller is "geographicusmaps" and is located in Brooklyn, New York. This item can be shipped worldwide.