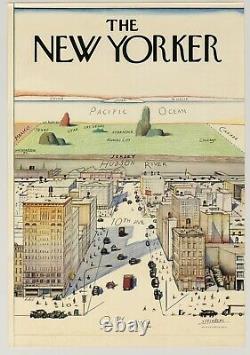 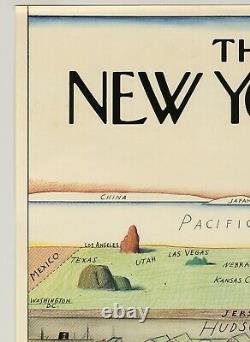 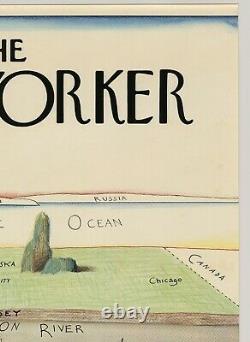 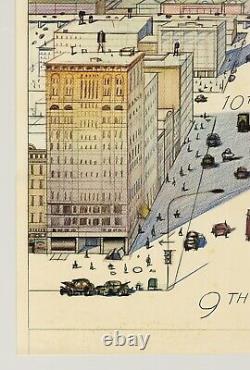 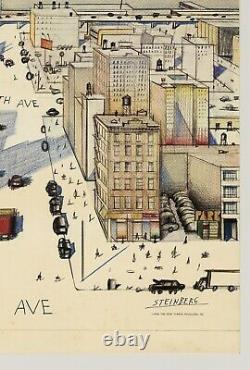 New York: The New Yorker Magazine, 1976. Original impression [10,000 copies]. 29 x 40.5 - inch [73.6 x 103 cm] trim size image printed via offset lithography on a lightweight semi glossy sheet in four colors. This example faintly spotted along the lowest 2 inches of the poster [see scans], otherwise a very good example. A 29 x 40.5 - inch [73.6 x 103 cm] poster designed by Saul Steinberg in 1976 for The New Yorker. Steinberg's most famous composition, A View of the World from Ninth Avenue, was The New Yorker cover of March 29, 1976. This is a bird's-eye view of the city from Ninth Avenue in a straight line westward, with space becoming ever more condensed, and leading, according to American imagination, to Asia.

Saul Steinberg defined drawing as "a way of reasoning on paper, " and he remained committed to the act of drawing. Throughout his long career, he used drawing to think about the semantics of art, reconfiguring stylistic signs into a new language suited to the fabricated temper of modern life. Sometimes with affection, sometimes with irony, but always with virtuoso mastery, Saul Steinberg peeled back the carefully wrought masks of 20th-century civilization. While renowned for the covers and drawings that appeared in The New Yorker for nearly six decades, he was equally acclaimed for the drawings, paintings, prints, collages, and sculptures he exhibited internationally in galleries and museums.

Steinberg crafted a rich and ever-evolving idiom that found full expression through these parallel yet integrated careers. Such many-leveled art, however, resists conventional critical categories.

I dont quite belong to the art, cartoon or magazine world, so the art world doesnt quite know where to place me, he said. 1 He was a modernist without portfolio, constantly crossing boundaries into uncharted visual territory.

In subject matter and styles, he made no distinction between high and low art, which he freely conflated in an oeuvre that is stylistically diverse yet consistent in depth and visual imagination. Steinbergs commercial work is too often isolated from his gallery art, whereas both groups, connected in style, concept, and motifs, are the product of a single artistic vision.

In the art world, Steinberg had first achieved prominence in 1946 as a participant in the famous Fourteen Americans exhibition at The Museum of Modern Art, New York, where his work hung alongside that of Arshile Gorky, Robert Motherwell, Isamu Noguchi, Theodore Roszak, and Mark Tobey. His first major solo show took place in 1952, a two-gallery exhibition mounted by the Betty Parsons and Sidney Janis galleries in New York. Parsons and Janis became his US dealers, holding joint exhibitions of his work into the 1970s; beginning in 1982, he wasand continues to berepresented by the Pace Gallery.

Versions of the 1952 sell-out show traveled in the US, England, France, Brazil, Holland, and Germany for three years. In Paris, it was installed at the Galerie Maeght, which continued to mount Steinberg exhibitions through the 1980s. For an excellent and ever-changing selection of rare and out-of-print design books and periodicals covering all aspects of 20th-century visual culture. Please contact me for details.

The item "1976 Saul Steinberg A VIEW OF THE WORLD FROM NINTH AVENUE the New Yorker POSTER" is in sale since Tuesday, March 2, 2021. This item is in the category "Art\Art Posters". The seller is "modernism101" and is located in Shreveport, Louisiana. This item can be shipped worldwide.