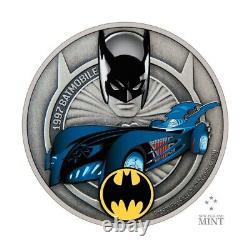 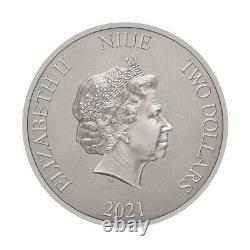 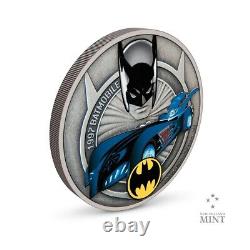 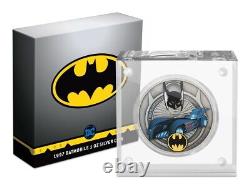 After the previous Batmobile was destroyed by The Riddler in Batman Forever BATMAN introduced a new Batmobile in the Batcave during the 1997 movie Batman & Robin just before he and ROBIN went on to face Mr. Taking inspiration for its design from classic roadsters, this Batmobile had a length of 30 feet long - one of the longest Batmobiles in the entire history of the car - and featured neither a passenger seat nor a canopy. Like the previous Batmobile this one featured light-up wheels and engine panels. However, the displays were much more involved with red, orange, yellow, and blue lights, as well as special pulsating lights in the counter-rotating turbine intake! New design features included three small exhaust nozzles on both of the rear fenders, so the final effect was that the six exhausts made a distinctive "V" pattern. Though the vehicle had fins on the back like the previous version, the fins were changed to look sharper and had their size increased substantially. The wheels on this Batmobile were less flashy though, with only a silver Bat design included in the centre, although a Bat mask was incorporated onto the nose of the car.

This 1997 Batmobile is faithfully replicated on this antique finish silver coin, along with additional BATMAN imagery, and is placed in a magnetised acrylic block so it can be easily displayed. The outer box is custom made to match and features the dramatic BATMAN logo and more BATMAN imagery on the base. Inside the box you'll also find a Certificate of Authenticity confirming the coin as one of only 2,000 available worldwide!