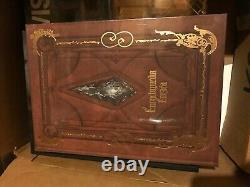 This book is in English. The text is all in English. Size: A4 size 304 pages. A collection of gems that covers the details of Eorzea's theory, history, country and culture, land, people, demons, etc.

In eight chapters and 304 pages. "Final Fantasy XIV" is the only world setting book with a brush drawn from the development team itself, and is finally released! The theory of ether, crystal, faith, mythology, geography, etc. The world of Eorzea Chapter 2: History... Looking back on the history of Eorzea from the first psychic to the dragon poetry war.

Discover the history and culture of the major six tribes living in Eorzea, such as Hulan and Lalafel Chapter 4: Urban States and Regions: The Formation of Major Countries, Cultures, Organizations, Related People, and Regions. Introduction Chapter 5: Organization and People... About the organization made by each aspiration and purpose, and the people who belong to it Chapter 6: Jobs... The formation, skills, equipment, and the like about the combat techniques acquired by adventurers. Chapter 7: The Beasts and Gods...

Various beasts that live in Eorzea. Cats and monsters, classified by category.

The seller is "new$comer" and is located in Round Lake, Illinois. This item can be shipped worldwide.