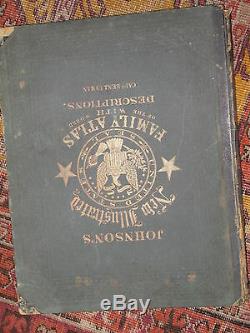 The numbering is confusing: double-page sheets are given two numbers, occasionally more than one area or country is included on one double-page sheet. In addition there are occasional unnumbered map sheets. Publisher's dark green cloth boards with gilt us seal large device in front, black leather spine, gilt titles.

Spine strained, and teared at edges, contents and maps in excellent state, except age toning and some very marginal foxing. This edition adds new and updated maps copyrighted by a. Johnson to the older maps used in the colton's general atlas. The frontispiece illustration is the one of the Indians on a cliff that was used in earlier Colton atlases. A wealth of statistical and scientific information is provided, as is a chronological history of the"great rebellion", i.

The text pages, illustrated with wood- engravings, contain brief sketches of the history, people, and natural history of the various regions and countries of the world. In addition there are a double-page comparative chart of mountains and rivers, a single-page diagram of time differences around the world , a new color double-page chart of national emblems (flags) and a page of engraved coats of arms of american states.

RARISSIMO 105 MAPPE COLORATE mondo 1866. Foto su richiesta images on request. The item "JOHNSON'S NEW ILLUSTRATED FAMILY ATLAS OF THE WORLD 105 maps 1866 new york raro" is in sale since Wednesday, April 24, 2019. This item is in the category "Arte e antiquariato\Libri antichi\Dal 1800 al 1899". The seller is "paulpaulg" and is located in roma, RM. This item can be shipped to North, South, or Latin America, all countries in Europe, all countries in continental Asia, Australia.