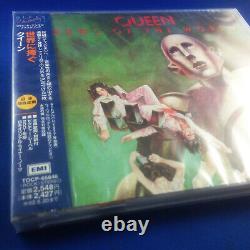 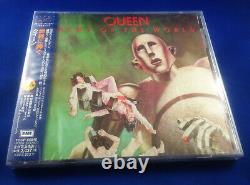 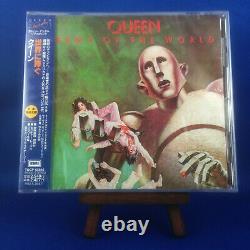 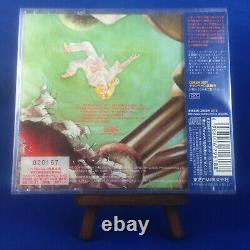 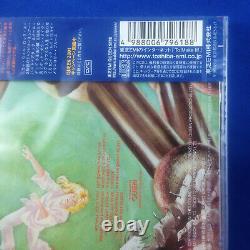 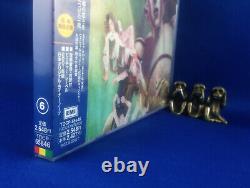 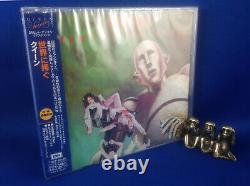 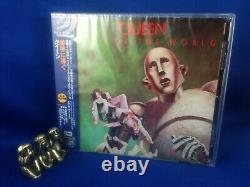 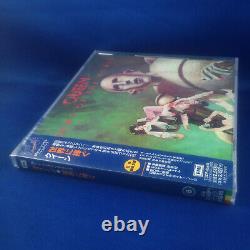 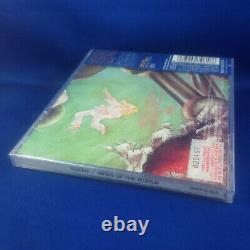 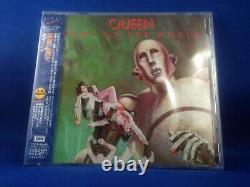 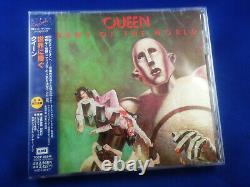 QUEEN: News Of The World (EXTREMELY RARE 2001 JAPANESE ADVANCE MEDIA ABBEY ROAD TECHNOLOGY 24bit DIGITAL REMASTER PROMOTIONAL CD TOCP-65846) LONG OUT OF PRINT. The 2001 Queen Forever Japanese 24bit Digital Remaster Series No. 6 (The whole series is numbered on the obi strip spine, 20 albums). News of the World is the sixth studio album by the British rock band Queen, released on 28 October 1977 by EMI Records in the United Kingdom and by Elektra Records in the United States.

News of the World was the band's second album to be recorded at Sarm West and Wessex Sound Studios, London, and engineered by Mike Stone, and was co-produced by the band and Stone. In 1977, punk rock acts, most notably the Sex Pistols, sparked massive backlash against progressive rock artists such as Queen, to which the band responded by simplifying their symphonic rock sound and gearing towards a more spontaneous hard rock sound. [1][2] The album subsequently went 4× platinum in the United States, reaching number 3 on the US Billboard 200, number 4 on the UK Albums Chart and achieving high certifications around the world. [3] Its lead single, "We Are the Champions", reached number two on the UK Singles Chart and number four on the Billboard Hot 100.

Critical reaction to News of the World was initially mixed, with many reviewers commenting on the band's change in musical style. However, it has since come to be regarded as one of Queen's greatest albums, while "We Are the Champions" and "We Will Rock You" have since become rock anthems. Centre of the CD has sample not for sale printed in either Japanese or English and the back features a unique numbered sticker in Japanese.

All tracks that had been originally shortened for radio play on the original releases are RESTORED HERE IN THIS SERIES TO THEIR ORIGINAL RUNNING TIME. In 2001 Toshiba-EMI Japan commissioned exclusive JAPAN ONLY REMASTERING and re-issued the entire Queen catalogue of albums. They were carefully digitally re-mastered to 24bit digital. The ORIGINAL ANALOG MASTER TAPES WERE USED FOR THE FIRST TIME FOR CD MASTERING except on the newer digital recordings. This was the first time they were properly mastered for CD by Peter Mew at Abbey Road Studios with minimal dynamic range compression and they sound amazing.

There are no bonus tracks etc, because the main aim here is to make the entire catalogue as Queen intended, every album as it was originally released but beautifully bought up to CD standard for the first time and preserve the integrity of each album almost totally removing the noise floor. These 2001 Remasters and the 2004 Mini LP Replicas (which are sonically identical) are my "go to" Queen recordings. These original analogue masters have been digitally transferred at 24 bits resolution, processed using Sonic Solutions NoNoise technology and mastered to 16bit for CD using Prism SNS Noise Shaping superior dithering as the crucial step. This brilliant album, serves as a timeless masterpiece and tribute to QUEEN on CD.

This is an extremely rare PROMOTIONAL PRE-RELEASE ADVANCE MEDIA REVIEW COPY of the 2001 Japanese CD ISSUE OF QUEEN'S NEWS OF THE WORLD. Released in a jewel case with booklet and folded sheet with lyrics and information in Japanese as part of the " queen Forever Series" printed on the obi strip. THIS IS AN EXTREMELY RARE STILL FACTORY SEALED JAPANESE FIRST PRESSING PROMO CD FROM 2001. I COULD NOT FIND ANOTHER COPY ANYWHERE IN THE WORLD AT THE TIME OF MAKING. ONE OF THE JEWELS OF MY COLLECTION.

I personally love all the Japanese issues above the rest of the world, not only sonically but for the fantastic packaging. I have another non promo copy of this CD and it sounds incredible. As a collector the most important thing is rarity. There aren't many of these around, and I can't find another PROMO COPY of this anywhere else in the world that is mint, brand new like mine.

As the years go by, these albums are going to get harder and harder to find as CD production is falling every year. CD's don't wear out, vinyl records do. I grew up with vinyl but the only thing I miss are the covers. OUT OF PRINT JAPANESE PROMO PRESSING.

Toshiba Japanese promo CD's are the most sought after by collectors like me because the stamping and numbering on the inner ring of the CD means they make a separate glass master just for promo samples. This means only one metal master stamper is produced instead of the father-mother-stamper method for regular CD's. This means SUPREME QUALITY, or the best it possibly can be as an exact copy of the original master without any data loss in production.

I love collecting Japanese CD's, they are generally superior quality to the rest of the world on every level in my opinion. All the JAPANESE CD's I own are the best sounding and best packaged in the world with very few exceptions!! IT IS BRAND NEW STILL FACTORY SEALED. Has been packed away in storage for over 20 years! We Will Rock You 02.

Sleeping On The Sidewalk 09. My Melancholy Blues For The Serious Queen Collector: THE QUEEN 2001 Japanese 24bit Digital Remaster Series: 24bit won't change the fact that the music industry doesn't follow a standardized volume level for mastering. A lot of releases are mastered loud with lots of compression in the form of hard limiting.

The percussion seems to suffer the most as it gets drowned out to elevated mid-tones. Bit Rate has no effect on the sound, only the noise floor. Older non remastered music from the 70's, 80's and early 90's has incredible dynamic range but is limited by the mastering for vinyl which actually squashes the bottom and top end so the grooves on a vinyl record are not to wide and you can fit the music onto the record and also not cause the stylus to jump off the record because the grooves are to violent. Record companies mainly transferred these masters to CD so they sound dull and lack any sparkle.

Currently most music is remastered in 24bit but heavily hard limited to stand out on radio, Spotify, Apple etc. Queen's original EMI releases on CD sound stellar, but they are only vinyl masters transferred to CD which all record companies were guilty of in the 80's & 90's. Vinyl masters have centered bass and drums, bass and treble are stripped back to allow for the short comings of vinyl which is the size of the groove on the record which can't be to big (bass) or to small (treble) as the stylus will not track properly.

Sound systems of the vinyl era were designed to enhance the reduced frequencies on playback. The 2001 Abbey Road Technology Japanese remasters are done in 24bit with minimal dynamic range compression. The detail in these CD's are spectacular on high quality digital system designed for CD playback. They're the best I've ever heard and sound absolutely incredible with the one major advantage of 24bit being a dramatic lowering of the noise floor so low it is inaudible to the human ear. Then there's the heavily compressed 2011 remasters, which are likely the 2001 remasters with a lot of EQ tweaking to bring out the mid-tones and hard limit the peaks.

They are not good (except Queen I & II which are very good), dynamics squashed and way to much top end, which is also a common trait of remastering done by older gentlemen who have lost the top 3-6kHz of their hearing which happens to all of us. I still collect everything but not because of sound, these 2001 remasters are the pinnacle sound wise and they are THE FIRST PROPER CD REMASTERS. The 2004 Japanese Mini LP replicas use the same masters and are the same stellar quality as these jewel case releases. Every other SACD, SHM, DVD etc etc release in the last ten years use the 2011 remasters mostly, and are no where near as good as these incredible 2001 releases. Especially "LIVE KILLERS" which is astounding, especially considering the actual master tapes are awful and there is only so much a mastering engineer can do. Queen always intended "Live Killers" to be a rough and ready, warts and all live album as they had, at the time, been continually criticised for being to slick.

As an example, the 2001 update of "Queen Live Killers" on CD features the latest 24bit digitally re-mastered sound, created for the Japanese re-issue series in 2001, from the 1979 analogue production master mix tapes. It is the best and last version ever released. Live Killers did not get a release in the 2011, 40th Anniversary Remasters. The packaging is also based on the vinyl LP artwork from 1979 and includes all the original sleeve notes. There is no advantage in playback of any format since red-book CD at 44.1Khz and 16bit which is already ridiculous overkill High Definition.

24bit is only an advantage at the actual recording stage as it provides superior dynamic range (which is not required for playback) and an almost non-existent noise floor. If you pressed the same master of anything on every different format they would all be identical wave forms and sound exactly the same. The only advantage is SACD and DVD-A can do surround, Dolby Atmos etc and store images text etc. The Record Companies love that, and a lot of people have fallen for it. The EU countries, France, Italy, Spain etc charge VAT over 22 Euros.

We haven't had a lost or damaged parcel yet but it's bound to happen sooner or later. This item is in the category "Music\CDs". The seller is "stamfordpark" and is located in this country: AU. This item can be shipped worldwide.