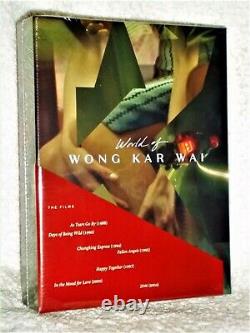 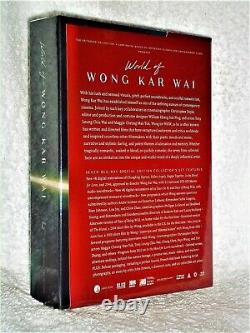 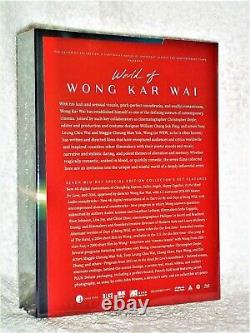 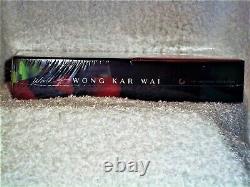 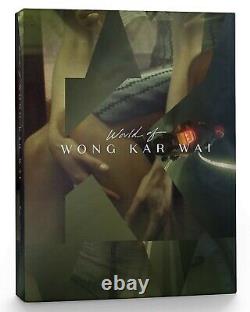 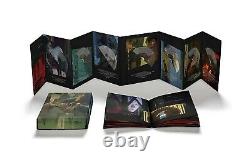 This 7-Disc BLURAY is BRAND NEW!! It includes all the original cases, covers, inserts and, of course, the disc(s) itself. Wong Kar Wais most beloved works, together for the first time, including three films new to Blu-ray! With his lush and sensual visuals, pitch-perfect soundtracks, and soulful romanticism, Wong Kar Wai. Has established himself as one of the defining auteurs of contemporary cinema.

Joined by such key collaborators as cinematographer Christopher Doyle; editor and production and costume designer William Chang Suk Ping; and actors Tony Leung Chiu Wai and Maggie Cheung Man Yuk, Wong (or WKW, as he is often known) has written and directed films that have enraptured audiences and critics worldwide and inspired countless other filmmakers with their poetic moods and music, narrative and stylistic daring, and potent themes of alienation and memory. Whether theyre tragically romantic, soaked in blood, or quirkily comedic, the seven films collected here are an invitation into the unique and wistful world of a deeply influential artist. World of Wong Kar Wai (The Criterion Collection) (As Tears Go By / Days of Being Wild / Chungking Express / Fallen Angels / Happy Together / In the Mood for Love / 2046) [Blu-ray]. With his lush and sensual visuals, pitch-perfect soundtracks, and soulful romanticism, Wong Kar Wai has established himself as one of the defining auteurs of our time.

Next March, Criterion will celebrate his swoon-worthy cinema with the most comprehensive box set of his work ever released, including new 4K digital restorations of his acclaimed feature films. In the Mood for Love. This beautifully illustrated deluxe package also contains an extended version of Wong's 2004 short film.

New program in which Wong answers questions submitted, at the invitation of the director, by authors André Aciman and Jonathan Lethem; filmmakers Sofia Coppola, Rian Johnson, Lisa Joy, and Chloé Zhao; cinematographers Philippe Le Sourd and Bradford Young; and filmmakers and founders/creative directors of Rodarte Kate and Laura Mulleavy. Featuring different edits of the film's prologue and final scenes, on home video for the first time. Hua yang de nian hua. A 2000 short film by Wong. A 2004 short film by Wong, available in the U. Interview and "cinema lesson" with Wong from the 2001 Cannes Film Festival.

Three making-of documentaries, featuring interviews with Wong; actors Maggie Cheung Man Yuk, Tony Leung Chiu Wai, Chang Chen, Faye Wong, and Ziyi Zhang; and others. Episode of the television series. From 1996 featuring Wong and cinematographer Christopher Doyle. Interviews from 2002 and 2005 with Doyle. Excerpts from a 1994 British Film Institute audio interview with Cheung on her work in.

PLUS: Deluxe packaging, including a perfect-bound, French-fold book featuring lavish photography, an essay by critic John Powers, a director's note, and six collectible art prints. SELL illegal bootleg tapes, copies, screeners, or any type of illegally burned CDs/DVDs! ALL ITEMS ARE FACTORY ORIGINALS and, unless otherwise noted, include their ORIGINAL US factory made cases, inserts/game book and, of course, the items themselves. Powered by SixBit's eCommerce Solution.