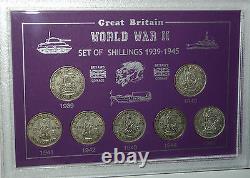 This set comprises of the seven George VI shilling coins issued during The Second World War, i. 1939, 1940, 1941, 1942, 1943, 1944 & 1945. The coins are housed within a display that is held in a protection case, sized just over 17cm x 12cm. The display and case are in New/Mint condition and the coins are in Fine (or better) condition. Our manufacturing process includes a precision laser cutting method to create the necessary holes in each display for the required coins to be inserted and held, safely recessed, in the correct position.

This would make a wonderful gift for a coin collector or military enthusiast. The product can be removed from the protection case, to allow frame mounted display, if so desired. The year that was 1939.

In January, the Irish Republican Army (IRA) begins a campaign of terrorist bombing in England, hoping to get concessions over northern Ireland from the British government. In February, London conference on the future of Palestine ends in failure. On 15 March, German troops march into Prague, and Adolf Hitler annexes the whole of Czechoslovakia.

The year that was 1940. On 10 May, Winston Churchill becomes British prime minister, forming a Coalition government. From 10 to 14 May, Germany invades the Netherlands, Belgium and Luxembourg.

From 27 May to 4 June, more than 300,000 Allied troops are evacuated from Dunkirk to Britain. On 17 June, France surrenders to Germany, and Adolf Hitler holds a victory parade in Paris. Is divided in two: the Germany-occupied north and south-west, with the rest under the rule of the so-called. Government, which is actually a German puppet.

Meanwhile, Charles de Gaulle in London proclaims the formation of the Free French movement. Between August and September, the Battle of Britain is fought as the German Luftwaffe tries to bomb Britain into surrender. On 5 November, Franklin Delano Roosevelt is re-elected US president for an unprecedented third term. Actor Charlie Chaplin stars as Hitler in the satirical Hollywood film The Great Dictator.

The year that was 1941. On 11 March, following pressure from President Franklin Delano Roosevelt , the US Congress passes the Lend-Lease Act, which exchanges military aid to Britain and its allies for the lease of bases in British possessions. On 22 June, German troops invade the Soviet Union in Operation Barbarossa, the largest land invasion in history. Einsatzgruppen (Action Groups) slaughter up to 500,000 Jews.

From 5 December, Soviet troops halt the German advance north of. On 7 December, Japanese aircraft attack the. Fleet at Pearl Harbor in. On 11 December, Germany and Italy declare war on the United States. The US army adopts the Jeep.

During the German siege of Leningrad, musician Dimitri Shostakovitch composes his 7th Symphony. American film-maker Orson Welles directs and stars in Citizen Kane, a film that uses innovative camerawork to tell the story of a newspaper tycoon based on William Randolph Hearst. The year that was 1942. On 20 January, senior Nazis meet in Berlin at the Wannsee Conference to plan the'Final Solution' - the extermination of European Jews. On 15 February, Japanese troops capture Singapore and over 70,000 British and Commonwealth soldiers and airmen.

Between March and the autumn, the Germans establish six death camps to exterminate the Jews, gypsies, homosexuals, the mentally disabled and other'unacceptable' groups. One of the camps, Auschwitz, daily sends up to 10,000 Jews to the gas chambers.

On 4 June, American troops defeat the Japanese fleet in the battle of Midway, which turns the tide of war in the Pacific. In August, Mahatma Gandhi launches the'Quit India' campaign, which calls on the British to leave India immediately. On 23 October, British troops beat the German army at El Alamein in north Africa. On 11 November, Adolf Hitler orders the German occupation of Vichy France (see 1940).

On 19 November, Soviet troops begin a counteroffensive against German army at Stalingrad. In the United States, the Manhattan Project begins to develop an atom bomb, while German scientists build the V2 rocket bomb.

On 31 January, 300,000 German troops surrender at Stalingrad. On 10 July, Allied troops invade Sicily, which two weeks later leads to the fall of Benito Mussolini. On 20 July, Soviet troops win the battle of Kursk, the largest tank battle in history and the turning point in the war on the Eastern Front. On 3 September, Italy surrenders unconditionally. A week later, the Germans occupy Rome. From 28 November to 1 December, at the Tehran Conference, Franklin Roosevelt and Winston Churchill give Stalin an outline of the plan for the invasion of France the following year. Jacques-Yves Cousteau develops the first scuba diving gear. French philosopher Jean-Paul Sartre publishes L'être and le neant (Being and Nothingness), the most complete statement of existentialism. By Richard Rodgers and Oscar Hammerstein opens in.

The year that was 1944. Is liberated by Allied troops.

On 6 June, the D-Day invasion of German-occupied. On 20 July, a plot by German officers to assassinate Adolf Hitler fails. On the last day, the Japanese employ kamikazes - bomb- carrying aircraft flown by suicide pilots. Is liberated by Allied troops.

French film-maker Marcel Carne makes Les enfants du paradis (The Children of Paradise), a bittersweet historical film. The year that was 1945. At the Yalta Conference of 4-11 February, Churchill, Stalin and the ailing Roosevelt discuss the post war settlement of. Stalin achieves far more than the other two. From 13-15 February, the Allies bomb.

Killing at least 60,000 civilians in a fire storm and destroying the city's historic centre. On 20 March, British and Indian troops enter. On 12 April, US president Franklin Roosevelt dies, age 63. He is succeeded by the vice president Harry Truman. On 28 April, Benito Mussolini and his mistress Clara Petacci are captured and shot by Italian partisans near Milan. On 30 April, Adolf Hitler marries his lover Eva Braun and both commit suicide in a Berlin bunker as Soviet troops approach. On 7 May, Germany surrenders. The country is divided into Soviet, American, British and French occupation zones.

Within the Soviet zone, is also divided in the same way. On 26 June, the United Nations Charter is signed by 51 nations in. A Labour landslide in the general election ousts Winston Churchill as prime minister. Instead Clement Attlee forms a government. On 6 and 9 August, US aircraft drop atomic bombs on, respectively.

On the order of Emperor Hirohito , Japan surrenders on 2 September, ending World War II. From 20 November, the International Military Tribunal, sitting at Nuremberg, tries crimes against peace, war crimes and crimes against humanity committed in the European Theatre of Operations (ETO). It rules that'obeying orders' is an insufficient defence for having committed such acts. The tribunal delivers its verdicts on 1 October 1946, including death sentences for Joachim von Ribbentrop, Hermann Goering, Martin Bormann and nine other leading Nazis.